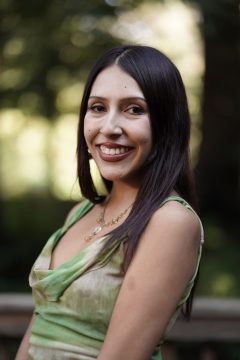 Rachel is a happy and proud first generation Peruana who was raised in Long Beach, California. Growing up, she quickly began to realize the power and knowledge that exists within families and communities. With this, came an understanding that there is a prominent struggle that exists in accessing and achieving food and health. While attending the University of California, Santa Cruz as an Environmental Studies major, Rachel recognized that existing Indegenous knowledge and community knowledge was boundlessly valuable in understanding how social structures can be dismantled and reshaped. As a third year student, she became involved with Friends of Community Agroecology Network (foCAN) where she learned so much about urban farming and gardening, seed saving, and building community. She found that there was a much deeper intersection between environmental justice and social justice that she was interested in exploring. She began a second major in Community Studies, where she was able to begin a long term internship and relationship with a community organization of her choice. Rachel found Acta Non Verba and was so inspired by the people behind it and the work that they were doing.  She believes that at its core, ANV is fundamental in challenging wider institutional structures, which have excluded Brown, and especially Black people, from land stewardship and direct relationships with the food system.

She began with ANV as a summer camp counselor, and enjoyed all of the activities and education involved with camp. Once summer was over, she spent many days volunteering at the Tassa farm, where she learned so much about food production and food sovereignty. More recently, she has joined the Beetbox CSA team, where she helps with coordination, packaging, and distribution of the weekly CSA produce. Rachel is forever grateful and happy to be part of ANV’s diverse and knowledgeable team. She is excited to continue learning about and contributing to empowering community work.