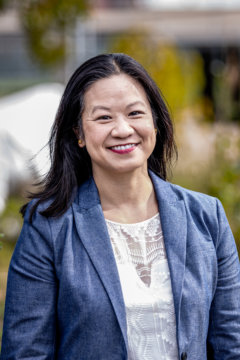 Chanthip Phongkhamsavath was born in a refugee camp in Thailand and shortly after resettled in the Bay Area with her mom and sister. Raised in Berkeley, she attended Berkeley’s public schools from pre-k all the way through college.  While at U.C. Berkeley she studied Sociology and Education and was extensively involved in student organizing aimed to support disadvantaged and students of color on campus.  Chanthip went on to receive the John Gardner Public Service Fellowship and spent ten months working in Washington D.C. at a local non profit.

After graduating from the Woodrow Wilson School at Princeton, Chanthip moved back to Washington D.C. to begin the Presidential Management Fellowship. She spent eight years working in the field of national security for the Federal government before returning to California. For the past five years, Chanthip has served as a Financial Analyst for the Oakland Unified School District, collaborating with principals throughout the city to effectively use their budgets.
Outside of the office, Chanthip can be found spending time with family and friends usually enjoying good food or talking about the next meal. Chanthip is also actively involved with St. Alban’s Episcopal Church where she’s been a member since childhood. She enjoys reading, baking, walking/strolling/hiking and bossing around her four nieces/nephews.  Although Chanthip admittedly doesn’t have the greenest thumb, she looks forward to learning about farming and further building the great work of Acta Non Verba.