This week the Atlantic and Allstate announced the winners of the fourth annual Renewal Awards Wednesday at an event in New York City! This annual event recognizes non-profit organizations that are stepping in to play a vital role in building healthy, sustainable, and equitable communities.  Five winners from across the country were carefully selected from a pool of over 9,300 hundred candidates and Acta Non Verba was one of them! ANV’s Founder & Executive Director, Kelly Carlisle, and Office Manager & Program Coordinator, Ayano Jeffers-Fabro, travelled to New York City this week to receive one of five Renewal Awards AND the Youth Empowerment Award for 2019! Watch the full video below.

The original prize was $20,000, but as a surprise to the winners, each of the organizations will receive $40,000 over two years to support their work. The winning organizations come from all corners of the country. They are: Adelante Mujeres, Forest Grove, Oregon; The Compton Initiative, Compton, California; New Moms, Chicago; Welcoming the Stranger, Langhorne, Pennsylvania; and Acta Non Verba: Youth Urban Farm Project, Oakland, California, which was the Allstate Youth Empowerment Award winner. Read more about these brilliant awardees.

Kelly and Ayano spent a few days in New York City for the Renewal Awards celebration. The festivities kicked off with a phenomenal dinner at Ai Fiori, a Michelin Star recognized restaurant. There, they met with other awardees, past awardees and the Renewal Project Team — where they were officially inducted into the Renewal family.  After the dinner, awardees gathered on the rooftop of the Ink48 Hotel to see one of the best views in NYC — soaking in the brilliance of the lights and bustling activities of the city. At the awards ceremony the next day, Kelly sat on a panel alongside fellow awardees to showcase ANV’s work. 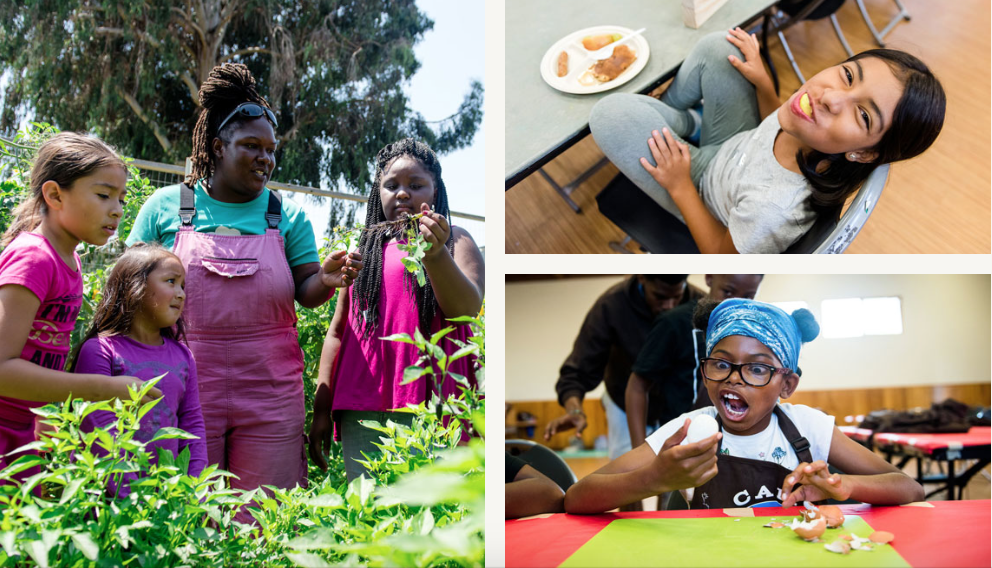 Acta Non Verba and our founder Kelly Carlisle were featured with our partners at Clif Bar in Clif Stories. Watch this awesome video and read about our amazing campers!

Strolling past raised beds of peppers, strawberries, and five varieties of tomatoes—including an eye-catching black variety known as Indigo Apple—she stops at a pomegranate tree: “Each stamen dot will become a seed. This is my favorite plant.” Then she moves onward past a bright bed of sunflowers before stopping to admire neat rows of summer squash: “We grew them all from seed. I’m so proud of these.”

Get your hands dirty and unearth Oakland’s multi-layered world of food in Take Root: Oakland Grows Food, an exhibition exploring aspects of growing food in Oakland. Hear personal stories from farmers and growers within the community, see compelling illustrations and maps, and explore hands-on interactive features while you learn what motivations Oaklanders have for growing food – including access to healthy and delicious ingredients, environmental and social justice values, or simply the joy of tending a garden. The exhibit opens December 16th 2017 to January 13th 2019.

In Homegrown Heroes, Chef Lidia Bastianich looks at veterans who return home and find farming to be a path back to civilian life. Seven poignant veterans’ stories take Lidia from the heart of Appalachia in Loom, W.Va. to Richmond, KY and Anaheim, CA, and prove that farming, beekeeping, and raising livestock can help individuals reconnect in a meaningful way to the community. The segment featuring Acta Non Verba starts around 38 minutes in.

ANV and our Executive Director, Kelly Carlisle, was mentioned in the December issue of Sunset Magazine! Pick up a copy and check it out! 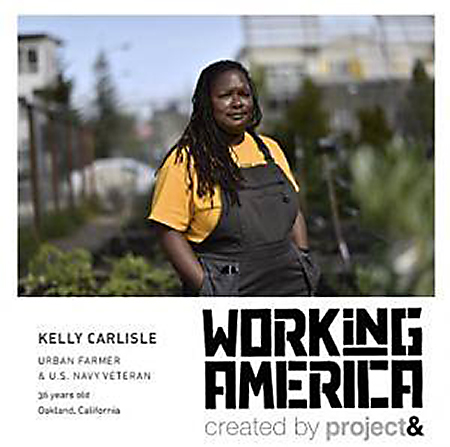 Join us for the launch of the traveling exhibit, “Working in America”, created by Project&, with one of the profiled workers, Kelly D. Carlisle. Kelly is Founder/ Executive Director of Acta Non Verba: Youth Urban Farm Project (ANV), and designed the Readers’ Garden outside of the Children’s Room at the Main Library. Walk through the exhibit with us, learn more about various lines of work, and consider submitting your own story!

This presentation is part of Working in America, a national multimedia initiative created by Project& (projectand.org). The initiative is composed of three components: a photographic exhibit; a 12-part radio series on National Public Radio, “Working: Then and Now”; and an online living community, “Your Working Story” (working.org).

Work is the thread that runs through all our lives. Through personal, authentic, raw, and honest stories, Working in America—conceived and curated by Jane M. Saks, President and Artistic Director of Project&—takes an intimate look at how we feel about what we do—or wish we could do—all day long: work. 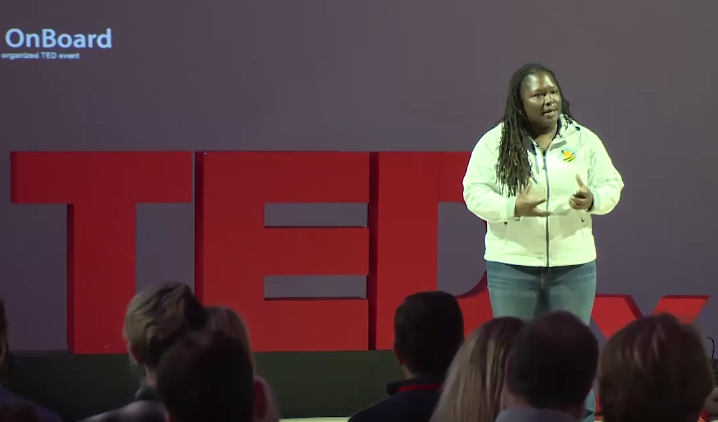 The Little Lemon Tree of Life – The discovery of a lemon tree in a nursery transformed the way Kelly sees the world, food and justice. TEDxOnBoard in San Francisco on February 25th, 2017. Enjoy the video below. 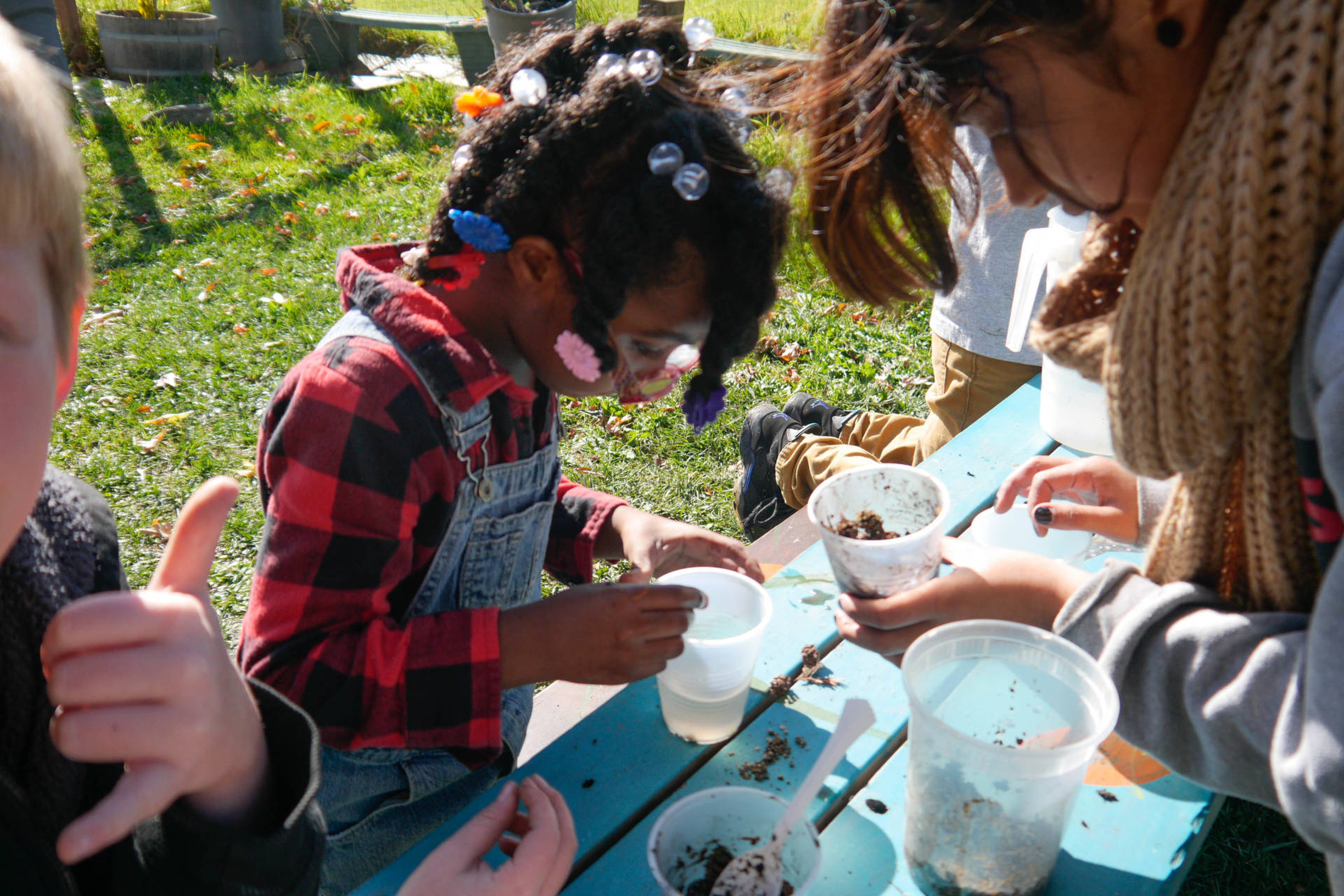 It started with a lemon tree. Kelly Carlisle didn’t grow up gardening. She didn’t have a windowsill herb garden. She knew about farming, of course, but in her mind there was a disconnect: food just sort of showed up at the grocery store. She worked a corporate job, wearing fancy clothes and heels to work. But she had gotten laid off during the recession, and one day a few years ago, she ended up at a Bay Area nursery with her daughter. They bought a lemon tree, and as it slowly started to flourish, so did Carlisle’s interest in gardening. 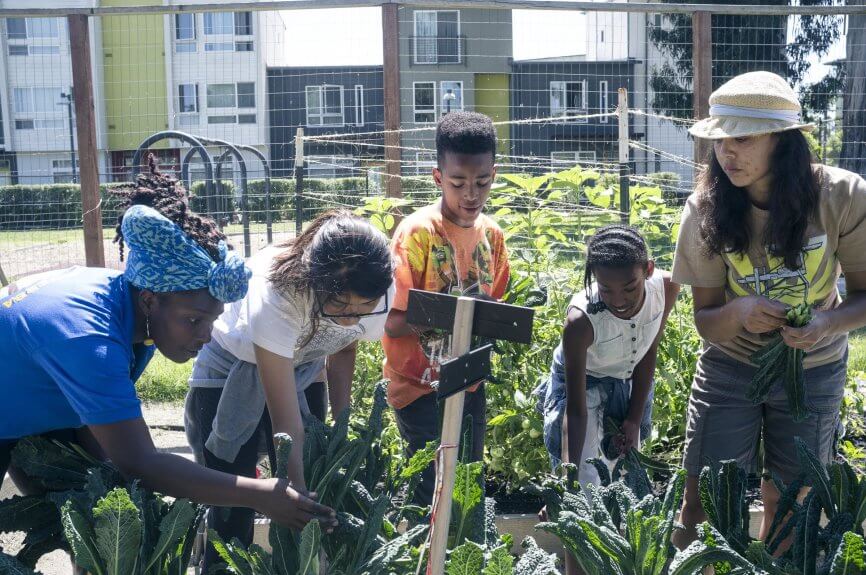 Acta Non Verba’s work was recently honored in the 2016 Good Food Org Guide by the James Beard Foundation and Food Tank. The vision and objective of this guide is to focus attention on nonprofit organizations who are working in fields, kitchens, classrooms, laboratories, businesses, town halls, and Congress to create a better food system. ANV founder Kelly Carlisle shares, “It feels wonderful to be listed with other amazing organizations doing good food work! We know it takes a village to address the problems of our food system, so we are proud and humbled by all the work and passion these organizations bring to the table every day.” See more as reported by the East Bay Times.

We’re very excited to announce that Mandela Marketplace will be supporting the Tassafaronga food pantry! Starting July 15th, the pantry will be featuring fresh produce and pantry foods from their food distribution network. Thanks Mandela!